So in my continued quest to churn out Malifaux terrain I have completed a dual use terrain piece - the Soulstone Vein/Magic Nexus. So far most all of my Malifaux terrain has been designed with two games in mind... Malifaux, for obvious reasons, and my other favorite game Legends of the Old West. This is my first piece that can't be used for either game and I'm ok with that. I think its simple but effective. However, I did discover a great way to make my ground crack for when I am doing parched desert or "dead zone" terrain pieces. Here are the pictures of the new terrain and you'll see how much more cracked the ground looks than my previous terrain. 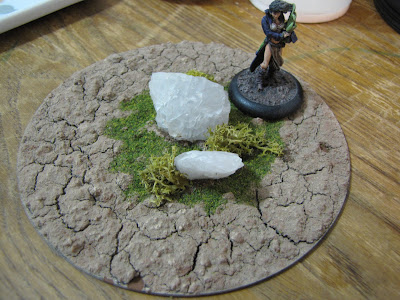 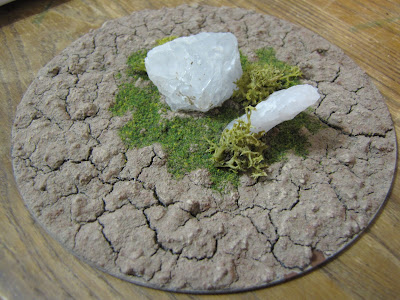 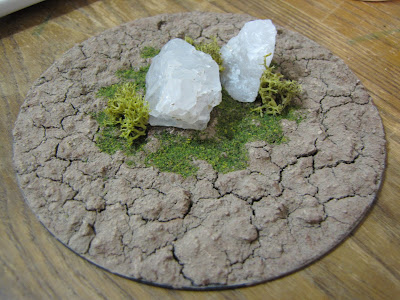 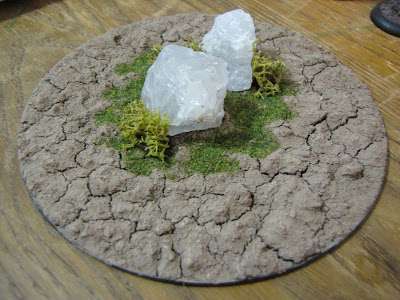 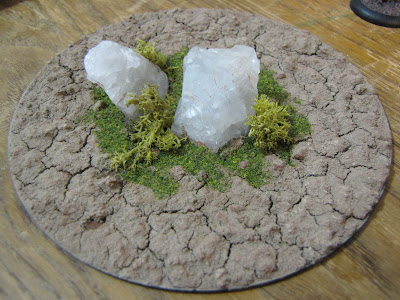 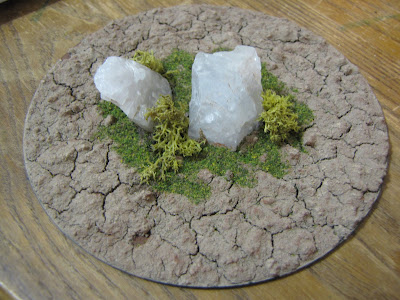 So I had used an old batch of my "ground" mix what I was calling porridge before and it was several months old and dried out. I poured some water in the container and stirred it up and applied it to my CD as a base. When I woke up the next morning it was cracked like this. At first I was thinking it was ruined but then I realized I could add some desert life around the stones and it would look if not magical, life giving at least. Which played in to both of the aspects of the terrain piece well. But, I was stumped for a while as to why it cracked like that.

While I was drybrushing the piece some small chunks fell out (I'm a heavy handed painter), which is the only downside to the dried cracked look. But it hit me the reason it cracked was because I had thrown off the water to glue ratio or at least that is my theory. I'm planning to test that out on some future terrain. Probably something more desert-like with cacti and such. Anyway, I'll be planning another terrain piece in the next few days and I'll try to do a more step-by-step entry for it. Thanks for stopping by.

Posted by graymatterblues at 7:31 AM

graymatterblues
Lewiston, Maine, United States
A recent transplant to New England I hail from the West Coast having been raised in the Bay Area, CA and have lived in Seattle, Portland (OR.) and New Hampshire before settling in Lewiston, ME.